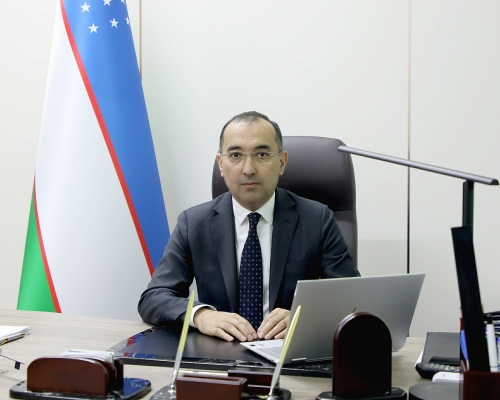 Implementation of the general management of the activities of the “Uzbekspace” аgency, organization of the tasks and functions assigned to the Agency “Uzbekspace” by acts of the President of the Republic of Uzbekistan, decrees of the Cabinet of Ministers and other legislative acts;;

ensuring a full and comprehensive consideration of proposals and draft regulatory legal acts submitted to the “Uzbekspace” аgency, conducting their thorough economic, legal and other expertise, as well as their approval within the timeframes established by the Cabinet of Ministers Regulations and the Regulations of the Administration of the President of the Republic of Uzbekistan ;

formation of a system of training, retraining and advanced training of employees of the “Uzbekspace” аgency;

ensuring the implementation of modern forms of work organization into the activities of the “Uzbekspace” аgency;

acceptance of orders and giving instructions that are mandatory on employees of the “Uzbekspace” аgency;

resolution of issues of promotion and bringing to disciplinary responsibility of employees of the Agency "Uzbekkosmos" in accordance with the procedure established by law, including consideration of questions about the expediency of their further stay in their position, implementation of systematic measures to increase their personal responsibility.

He was born in 1976 in Tashkent. Has a higher education. In 1998 he graduated from the Tashkent Electrotechnical Institute of Communications, specialty - engineer-economist of communications.

He began his career in 1998 as a marketing manager at the Tashkent International Telecommunication Center of Uzbektelecom JSC.

In 1999-2000 he worked as deputy head of the department of informatics and management at the Tashkent International Telecommunication Center of Uzbektelecom JSC.

In 2000-2001, he continued his career as a general director in "Exus Uzbekistan"

In 2001-2006, he was a director at “Aloqa Intel”, a subsidiary of the state-owned data transmission company “UzPak”.

In 2015-2017, he worked as the director of the UzMobile branch of Uzbektelecom JSC.

He is married and has 4 children.